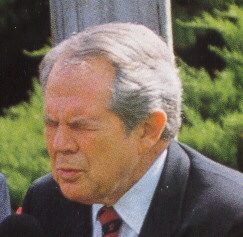 From the June 12 edition of the Christian Broadcasting Network’s The 700 Club:

“Ladies and gentlemen, we have to recognize that Islam is not a religion. It is a worldwide political movement meant on domination of the world. And it is meant to subjugate all people under Islamic law. In the Quran, it says it very clearly. There are two spheres. One is the Dar al-Harb, which is the realm of war. The other is Dar al-Islam, which is that part that’s under submission to Islam. There is no middle ground. You’re either at war or you’re under submission. Now, that’s the way they think.”

Pat Robertson is either an Islamic scholar or he is a liar. After claiming last year to be able to leg press 2000 lb. (breaking the previous record of 600 lb. set the previous year by a 21 year old football player in Florida), I think we may safely conclude that the latter word best describes him. More proof? Here’s Bishop Paul Hinder of the Catholic Church, speaking last week to Al Jazeera: speaking about the Christian communities in Saudi Arabia, he said: “It’s not an open church. Privately the Christians may gather in their houses in a very discreet manner. Of course it’s not easy to be a bishop here [in the Gulf],” he said. “But at least regarding the church life it is full of vitality.”

Churches meeting in homes, under threat of persecution..hmmm. That reminds me of those very first groups of new Christians who, in Acts 2, are described this way: “Day by day..they broke bread at home and ate their food with glad and generous hearts, praising God and having the goodwill of all the people. And day by day the Lord added to their number those who were being saved.”

Robertson says people in Saudi Arabia can’t pray because they don’t have churches to pray in. That’s like saying kids don’t pray at school because the principal isn’t allowed to get on the loudspeaker and lead them in a (written) prayer. And, correct me if I’m wrong, but didn’t Jesus wash the feet of his disciples in a rented upstairs room? He didn’t need a church or synagogue to fill a basin and wrap a towel around himself, and his movement did pretty well for quite a few years, I would say.

Religion is precisely the problem, whether it adorns the pulpits of Muslim imams or the soapboxes of people like Robertson. Religion says that doctrine is more important than people. It elevates human depravities to sacred standing, as it picks and chooses supportive verses and half-verses from its sacred writings to give credibility (read: power) to whatever religious dogmatist has the fastest printing press, the loudest speakers, or the greatest broadcast coverage.

The birthrate of Muslims will cause massive change in the coming decades. It is much higher in every nation where Muslims live than is the birthrate among “natives” of those countries. And the Christian religion has done little to win the hearts and minds of any of those Muslim babies or their parents! (In the Gaza strip of Israel, recently taken over by the Hammas- militant Muslims- there are almost 1, 600, 000 Palestinian Christians, half of which are children. They are going to be forced to become Muslim, which probably won’t be difficult for them since the Christian religion of the United States and Europe has virtually abandoned them for many years, because religion says it is more religious to support Israel in their oppression of Palestinians, no matter what their flavor.)

The early followers of Jesus were persecuted, imprisoned, and even slain. Yet it was from their example of outrageous, self-giving love that a flourishing Church grew. They were followers of Jesus, not Christian religionists. They looked to Jesus for answers to their predicament and heard things like, “Love your enemy” and “Turn the other cheek.” Christian religionists, with monetary and egoistic interests in the preservation of their precious institutions, answer with “increase the military budget” and “send your children to war” and “call in your tax deductible donation to our ministry today.”

2 thoughts on “Pat Robertson and the Religion of Fear”