I’m not a hunter, just so you know. But I occasionally fish and willingly accept the packages of meat hunter friends give to me. If you’re going to eat it, and it’s not endangered, or it runs across the kitchen floor on six legs, have at it. That’s not what this little rant is about.

Here’s what it is about: 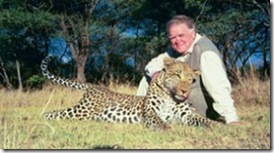 This is Paige Patterson, president of Southwestern Baptist Seminary in Fort Worth. He likes to kill animals- lots of them, the kind you can’t eat, but which you can call “trophies.” His Southwestern profile page used to contain many pictures of the tons of formerly live, free, usually African animals which have now had their hides stretched over styrofoam forms with glass eyes replacing their real ones. Apparently, others were as aghast as I was over the slaughter of God’s other creatures, because those pictures are long gone from the site.

Patterson’s not alone in his desire to see elephants, giraffes, lions, and cheetahs dead so he can lean in against them while they are still warm and bleeding. There are any number of Christian and non-Christian organizations dedicated to the extermination of exotic animals. I just happen to find the ones doing it in the name of Jesus particularly repugnant.

(What is that little animal toward the front there? A lion cub? The family dog gotten old and useless? A lamb?)

Patterson sponsors special gatherings around the United States for fathers and sons called Sportsman Safaris. Here’s what he stated at a recent safari in Arkansas as being the Numero Uno problem in America today:

“That problem, is a war against boys and the establishment of laws to prevent men from hunting and owning guns..it has produced a generation of fathers disconnected from their sons,” he said. The article, posted at Southwestern’s website, goes on:

“But Patterson said he believes dads can still give boys what they need, and that when fathers provide for their sons the nation is strengthened. Little boys, he said, need three things: a dog, a gun and a dad.

“Every little boy needs a dog,” Patterson said, “and not a little yip dog, but a big dog that he can be proud of.”

This is the stuff of Christianity in America, 2007. Read it and weep, or laugh, or join me in feeling like I need to vomit.