Oh, happy day! The BVM has landed here, right here on the West Texas prairie, and here she is!

She left her mark this time in the scar of an old native pecan tree. You can see in the picture that the south fork of that tree split away from the trunk, and it was there that the BVM either immediately inscribed herself or was revealed to the world after being embedded within the tree for at least the past five or six decades.

I personally had a hard time seeing her at first, so I’m really just going on the word of those who have the God-given (?) power to see the Virgin in those many odd places she chooses to appear. Me? In my quest to see anything anthropomorphic in the tree, I could only vaguely see Bishop Sheen, as he would sweep from the doorway to the blackboard in his priestly cassock on his Sunday afternoon television show in the 1950s. But then, I kept looking and (what do I know?) I thought I could see Sister Kenny raising money to fight polio like she was also doing in the 1950s. 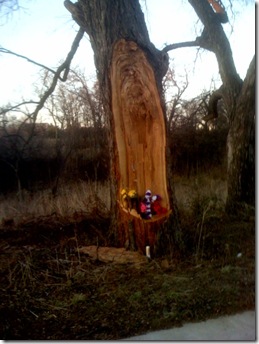 Then I made the mistake of continuing to look, wanting desperately to join the throngs (see them?) who’ve made a sacred grotto of the tree. I was able to see a virtual parade of personages, including but not limited to: Joan Baez, Soupy Sales, my Aunt Emma, Jimi Hendrix, and a substitute teacher in the fifth grade whose name I forget.

So there went another potential Epiphany, right out the always open window of my imagination!

Channel 5 out of Fort Worth and Telemundo out of Dallas have already given the tree their pandering-to-the-masses Seal of Approval by televising live reports on the perceived phenomena. Sorry I can’t lend much credibility to their fine reporting, but I’m kind of a stick-in-mud when it comes to sightings of the Divine. I get stuck on little stuff like wildflowers and ants, and dogs licking my face even when I’m feeling like crap. Those things tell me much more about God than the scar of a tree.

And, for the record,here’s Sister Kenny and Bishop Sheen:

2 thoughts on “The Virgin Mary Comes To Town!”