This could be called “Yet Another Reason I Love Texas.” 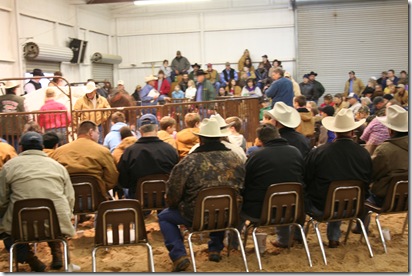 The local livestock auction for young people of this county is being held today. The winners in the various categories (swine, beef, and goats) get to auction their animals off to local banks, car dealerships, oil drilling companies, and other companies which bid BIG for the winning animals.

Now livestock auctions are being held somewhere in America every day of the week. And, yes, I know (and even agree with) some of the criticism of the livestock and meat-packing industry. But this auction has a whole different flavor (pun intended) than many of those other ones. This auction is one of those places where the spotlights and attention are young people doing well. And, while there is a difficult reality to be faced by these young men and women as they say “good-bye” to their animals, they are also learning about relationships in life, and being an integral part of a community that is vital to this area.

These animals have been raised for meat production since they were calves, kids, and piglets. They have been tended to daily by their young owners, and handled often so that they would “show” well when their time in the ring finally came. The animals are as clean and spiffy as their owners. 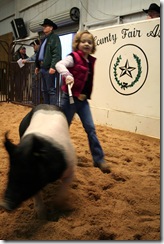 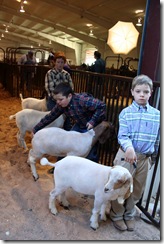 You’ll note that there’s not a lot of jubilation evident in these faces of these youngsters, despite the fact that they are walking away with a whole lot more money than they spent on the raising of their animals. They’ve experienced that it is possible- impossible not to– love an animal. But they are also learning about the purpose and hard work involved in raising their livestock. The ones who continue in ranching will never lose that tension between the care of their animals and the purpose of their being raised in the first place. Some of the gentlest, kindest people I know are ranchers who discovered that dilemma early on, and continue to face it daily. 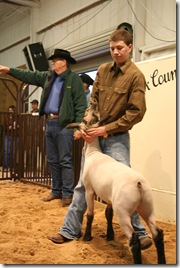 Another thing I love about this Youth Auction is that the organizers realize that people really do like to eat other foods besides meat! So the opportunity exists for cookies, cakes, and pies to be a part of the judging and auctioning process, too. This little boy just sold a $750 cake to a local bank! 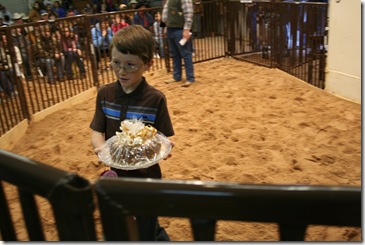 These are the kids who ride horses, have dogs and cats, grow up understanding and respecting the land, and who get to spend part of each day hoping for rain or shading their eyes against a sunset. They will never eat a hamburg in blissful ignorance of where it came from or be able to tolerate the intentional abuse of any animal.

Or any other person. Just watch them as they grow up and you’ll see what I mean. The lessons you see being learned in these pictures don’t end today. They are part of lives now and those lessons will will benefit all of us.