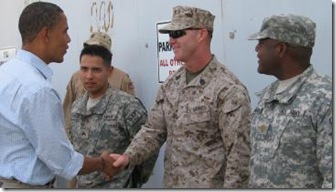 (From pictures sent to snopes.com by an American officer in Afghanistan, with the comment, “He was very warm and cordial.”)

Here’s part of email forwarded to me yesterday:

“I personally do not know this soldier but what he writes
speaks mountains. BE AFRAID, BE VERY, VERY AFRAID!!

Hello everyone,
As you know I am not a very political person. I just wanted
to pass along that Senator Obama came to Bagram Afghanistan
for about an hour on his visit to ‘The War Zone’. I
wanted to share with you what happened.
He got off the plane and got into a bullet proof vehicle,
got to the area to meet with the Major General (2 Star) who
is the commander here at Bagram.
As the Soldiers where lined up to shake his hand he blew
them off and didn’t say a word as he went into the
conference room to meet the General. As he finished, the
vehicles took him to the ClamShell (pretty much a big top
tent that military personnel can play basketball or work
out in with weights) so he could take his publicity
pictures playing basketball. He again shunned the
opportunity to talk to Soldiers to thank them for their
service.

I swear we got more thanks from the NBA Basketball Players
or the Dallas Cowboy Cheer leaders than from one of the
Senators, who wants to be the President of the United
States . I just don’t understand how anyone would want
him to be our Commander-and-Chief. It was almost that he
was scared to be around those that provide the freedom for
him and our great country.
If this is blunt and to the point I
am sorry but I wanted you all to know what kind of caliber
of person he really is. What you see in the news is all
fake.
In service,
CPT Jeffrey S. Porter
Battle Captain
TF Wasatch
I went to snopes.com (it took me all of 5 seconds) and saw- as I suspected- that the letter was fake. An Army spokesperson, in fact, stated that the tour was delayed because Obama took so much time meeting the troops.

And, after realizing he violated regulations about troops making political statements, Capt. Porter is asking that his email be deleted, and not forwarded. He is saying that “information put into his hands was untrue.”

Truth seems to matter less and less. It is what “I believe” that is important, and facts seem to be secondary to that sacredly-spoken tenet. We all need to call each other out when we use “I believe” as a preface to personal opinion to which we demand capitulation by others. “I believe” does not always precede a truthful, logical, or even a civil statement. It is jargon which we use in expectation that others will not, cannot, dare not argue with us.

Nonsense, I say! “I believe” should not be a free pass into obfuscation or the perpetuation of lovingly held personal opinions based on whims and culture.

Needless to say, I’m going to be writing some more about Credo statements. Because it’s time for some of them to knocked down.

(it’s easier to swallow than it is to chew..which makes it easy to HATE Obama or HATE McCain if your sources of info are whatever like-minded, non-critical thinkers are forwarding to you. But such a shortcut, in the end, almost always end in choking..)