In October, I was banished (their word) from one of  the fundamentalist Christian,  Rapture-obsessed forums. This particular one is billed as “your prophecy resource for the end times.”

It was the end of October, 2008. I was banished for daring to ask in one of the forums, the following question: “Can we assume that the president we elect on November 4 is God’s answer to our prayers?” It seems an innocuous sort of question, doesn’t it? Actually, I knew these folks would have a hard time with it, which is why I asked. They overwhelmingly, of course, wanted McCain/Palin to win- they’re the Republicans and they used kind of language that would appeal to these fundamentalist, literalist “Christians.” There were many, many written prayers in the forums there pleading with God to make their victory happen. But the polls showed Obama/Biden ahead; thus, their dilemma. To answer my question affirmatively, and in the face of a possible Obama win, it would be evident that God was different than this Rapture-obsessed crowd had understood God to be. They knew, after all, that God (He) was conservative, Republican, against Muslims, for war, for capitalism, against gays, against illegal immigration, for McCain, and against everything that Obama stood for, including his middle name. So if Obama would win, it would mean their fundamentalist and oh-so-narrow view of everything, would be in the spiritual toilet.

Thus, my banishment, and this segue..

In 2005, I lifted this particular quote from one of their forums. I lifted and kept it because it captures so well the attitude of so many fundamentalists regarding our world, our planet, this great and shared part of Creation upon which we are all utterly dependent:

“I think we Christians should look at this world as being a filthy restroom at a roadside gas station. Fate has brought us here, we try to touch as little of it as possible while doing our business, we hope to leave quickly, and we don’t ever plan on coming here again until it’s under better management.” 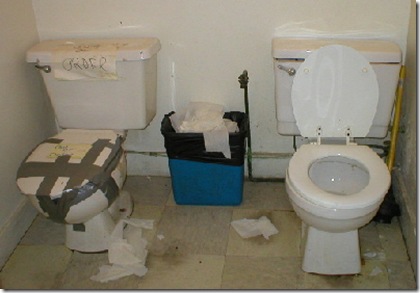 Welcome to their world!

That’s not an isolated attitude; in fact, it’s pretty common. They feel separate from the world, not a part of it, not responsible for it:  in it, but not of it. The world, they will tell you, and most persons in it, belong to Satan, the bad guy to whom they ascribe almost-God-like powers. “This world is not my home,” is one of those phrases heard every Sunday in most of their churches, and the focus of their lives becomes the end of their lives. They will only live when they die. Only when they die will they be able to leave the filthy gas station restroom they are trapped inside of; only in death will they be able to walk out the door, across the street, and down the hill to the river where, if they look closely, they will see tiny little wild violets in the spring, hundreds of tadpoles in early summer, the gold/red/orange/burgundy blanket of fallen leaves in the autumn, and the diamond sun-reflections in the whiteness of a wintertime snowfall.

I mean, I guess that’s their back-asswards, crypto-eschatological, FUBAR-brained thinking. No wonder they pray every day for the Rapture to happen! They’re getting tired of the stink!

12 thoughts on “The World is a "Dirty Gas Station Restroom.."”