There are heroes- real ones, the kind that risk their lives without a thought toward who’s watching. They don’t have to do what they do. Nobody would fault them for taking the easier way. But they do what they do because they must- if not for themselves, then for those who will follow.
Today is the 20th anniversary of the invasion of Tiananmen Square in Beijing by the Chinese government. The invasion- with tanks and other armored personnel- effectively ended a several week student-led protest which had been taking place in the square. On the first day of the invasion, two heroes emerged and they are both here, in the same picture. See them? 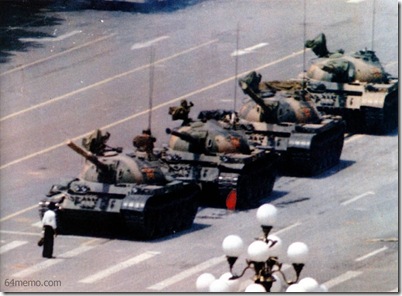 There is, first, the young man who took a position in front of the first of four tanks. He didn’t have to do that. He could have watched, and hollered, and thrown debris from  the sidelines. He would not have risked his life doing that, and there’s no one who would have blamed him for not staying still and protesting that way. But he didn’t stay still. He risked being squashed. He is a hero.

But there is another hero in the picture, too. The driver of the tank acted extraordinarily that day, too. He could have done the job he was expected to do and driven over the protesting student. The army was there to break up the student protest by killing some of the students if necessary, and that is what happened over the next several days. Many times.

No one  would have questioned the tank driver for squashing the student. He would have been doing his job. And the best way to stay out of trouble in any military operation is to do exactly as your superiors have ordered you to do. But the tank operator was a hero that day. He drove around the student. He broke ranks and disobeyed. The student stayed alive.

It is unknown what happened to the soldier in the tank for his act of disobedience. But he and the student birthed a whole new wave of hope in the world that day. It takes a hero to stand up to oppression. And it also, more frequently than we might think, takes a hero to back down.  Their actions, together,  set off a wave of hope which continues to inspire even today, 20 years later. You can feel it right now, yes?

Pass it on. In honor of a student and a tank operator, pass it on.