In a court of law, the whole story would be torn apart by even a mediocre prosecutor as soon as the words “virgin” and “pregnant” were used in the same sentence.

The defense could very well sway the jury by bringing out their main witness- Joseph, the put-upon and betrayed, but also believing, forgiving, and accepting fiance of the young “virgin mother.”

Here’s one more really great thing about the Christmas story that not many people have considered: it makes no sense. Two completely different birth stories- Matthew’s and Luke’s- that come together only on Hallmark Christmas cards and childrens’ Sunday School handouts. Unlikely scenarios, difficult time-lines, and a cast of characters that includes a chorus of singing angels- it is through that wild potpourri of people and events that Jesus the Messiah appeared in the world, and turned that world into a new creation.

Luke 1: 29Mary was greatly troubled at his words and wondered what kind of greeting this might be. 30But the angel said to her, “Do not be afraid, Mary, you have found favor with God. 31You will be with child and give birth to a son, and you are to give him the name Jesus. 32He will be great and will be called the Son of the Most High. The Lord God will give him the throne of his father David, 33and he will reign over the house of Jacob forever; his kingdom will never end.” 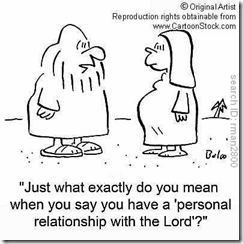 It made no sense and neither, if we admit it, does much of life. If we had a nativity story that followed a logical, consistent, and progressive series of facts, we would have every right to question all of it. When that kind of defense is put forward in a criminal court- when all of the witnesses and facts line up in perfect and straight rows, the prosecution can pretty easily show that there has been collusion and rehearsal in the presentation of a fictional defense.

Life, as we live it, is rarely an either/or set of decisions. We deal with people both as we hope they will be and as they are. We enjoy the food at a restaurant even though the service has been lousy. (Both/And) We do not throw our kids out of the house because their room is an unhealthy mess (Either/Or).

We learn to cut slack because slack is being cut for us all the time. We learn to give love and accept grace because we’re accepting love and extending grace all day long in our daily affairs. We may talk a lot in black & white, and even make some decisions based on what seems good and what seems bad, but we live in the inconsistencies of human interaction and in the chaos of a world that always being recreated.

The story of Jesus’ birth is a mess. So messy that Mark and John ignore it altogether. But that makes the story a lot like us. At least a lot like me. I’ll let you decide for yourself. That way both you and I will be right.