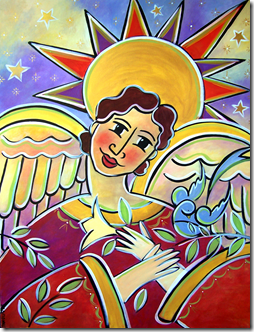 Luke 1: 29,30 [Mary] was thoroughly shaken, wondering what was behind a greeting like that. But the angel assured her, “Mary, you have nothing to fear..”

Right off the bat, in the first chapter of Luke, the story of Jesus begins. Included in that first chapter are two commands to not be afraid, both made by the archangel Gabriel, on behalf of God. The first admonition to “fear not” is made to Mary’s cousin-in-law, the priest Zachariah. The second is spoken to Mary herself.

From those two thematic statements there grew a stream of such statements throughout all four gospels. Trust me on this, or get a concordance. One angel or another or, most often, Jesus himself is always telling someone to “Fear not.”

“Fear not” must today be one of our main mantras. Speak it in lectio divina– divine reading. Let the words begin to echo, from instinct to instinct within yourself. From the instinct to be afraid of new things, to the instinct to flee whatever seems to be threatening, let this command to be not afraid bounce between and dull the sharp edges of such words.

Because all of us are working at a disadvantage. All of us have had the realities and residuals of fear, guilt, and shame sharpened to cutting edges within our hearts and souls. All of us have learned about or spent huge, inordinate, and ever-growing amounts of time to evaluating everything- the world around us, the people in that world, and ourselves. How has that happened?

The gospel story has changed, because those of us who are hearing it are part of a culture that has changed. We have moved  from that message of “Fear Not!” to the predominate spiritual message of today which says, “Be Afraid, Be Very Afraid!”

Here’s part of a poem (anonymous) written around 1820, the same year “’twas the Night Before Christmas” was published. It is from a Dutch/German tradition, and is in the voice of Santa Claus. The preceding verses contain lines about rewards given to good children; but this is what children of 200 years ago were already hearing:

But where I found the children naughty,
In manners rude, in temper haughty,
Thankless to parents, liars, swearers,
Boxers, or cheats, or base tale-bearers,

I left a long, black, birchen rod,
Such as the dread command of God
Directs a Parent’s hand to use
When virtue’s path his sons refuse.

From “Fear not!” to “the dread command of God” and “leave a long, birchen rod” for use on the skin of “children naughty.” That’s the movement of the Christmas story through time. It’s the too-easy, infectuous descent from Love to Fear, and it is the perpetual  plague of Christianity. It’s part of the also-perpetual perplexity that many students of Christianity face at some point in their lives. Historical pogroms of Jewish settlements, the murder of peasants in Luther’s Germany, The Roman Catholic Inquisition in Europe, Christian Church endorsed colonialism throughout the “New World”, and today’s endorsement of government torture by some evangelical Christian groups and political leaders…What the hell is all this anger and hatred and killing and blood and shame and guilt and war being done in the name of Jesus who was born while angelic choirs were singing “Fear Not!” ?? It has been enough for many many students of Christianity to be so perplexed, so unable to make such disparate parts jive, and so disappointed and sad at the ugly scream they perceive the wondrously whispered opening gospel sounds to have become,  that they leave. In droves. And those droves are increasing.

My intentions today have been to simply introduce the dichotomy, and say out loud what many people wonder about, but hesitate to publicly question. I want to spend more time examining some of those so-strange twists and turns the story of Jesus has taken through the darker corners of human history, because I believe the real story of Jesus is best expressed in those opening lines of fearlessness. The gospels were not written in, about, or because of fear.  The life of Jesus was not lived so that humans could attach their ravenous egos to his name and terrorize their ways through history. The baby Jesus wasn’t born in a manger  so that other children could be threatened with beatings in anticipation of his birthday’s celebration.

If we see where the story went wrong (and I believe it did, too often and horribly so), then we can perhaps again hear Gabriel say “Fear not!”..