We think we know the story of Jesus’ birth. Some of us were drawing pictures of what we were told had happened on Christmas Eve when we were in grade school, and almost everyone has seen creche displays in peoples’ homes or painted on store windows with 3″ brushes and poster paint (with optional blown foam snow). We could all, regardless of our personal faith traditions or non-traditions, recite the components of those nativity scenes: Mary, Joseph, Jesus-in-a-manger, wise men (3), shepherds (several, one of which is grizzled, one of which is a young boy), angels, various camels, sheep, donkeys, and cows, and a stable. Here’s an old Christmas card that captures some of those elements: 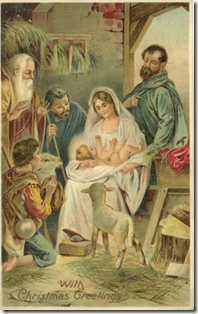 That was one of those Christmas cards from when Jesus was Norwegian. Here’s another representation of that collection of holy artifacts, a a 50% life size crèche assembled in a church:

The trouble is, even for those who believe every word of the New Testament, every jot and tittle of every verse, every comma and capital letter and space (even where none appeared in original Greek), even for those people, this conglomeration of texts, imaginations, and cutesy Hallmark artists, is not true- it’s not the way it was. The one thing we can absolutely, positively, 100% KNOW about the birth of Jesus is that none of it looked like anything like any of the above! Here’s what we DO know- literally, from the gospel of Luke, chapter 2, about the place Jesus’ birth:

5 He [Joseph] went there  [Bethlehem]to register with Mary, who was pledged to be married to him and was expecting a child. 6While they were there, the time came for the baby to be born, 7and she gave birth to her firstborn, a son. She wrapped him in cloths and placed him in a manger, because there was no room for them in the inn.

There is no stable, cave, barn or other outside shelter mentioned- only a manger and that could be anywhere: under a tent, in a courtyard, under an overhanging roof, in a grove of trees, or in a stable. Shepherds will show up in a few verses, in response to the sound of angelic singing. And, in the gospel of Matthew, some magi (or wise men or astrologers or scholars, depending on your translation, will follow a star and find Jesus in a house. A house, really. That’s all it says and it doesn’t say when. (Later in the chapter, there will be evidence that the wise magi astrologizing scholars visited when Jesus was about two years old.)

Almost everything we carry around in our mind’s and imagination about the birth of Jesus has been placed there by seeing old paintings, which gave birth in the late 1800s to Christmas cards. Which spawned Christian book stores. Which led to the selling of Christmas cards with glitter, and the selling of stuff like this: 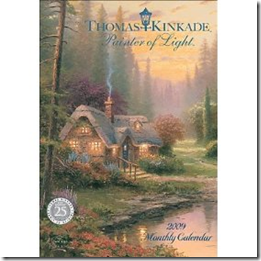 As fanciful and silly as are the paintings of Kinkade, which always seem to feature darling thatched-roof cottages with blazing-fireplace light pouring out of every window and built (almost always) on the flood plain of a creek or river, so are the images we have of Jesus’ birth also fanciful and sometimes, just as silly.*

It leads me to wonder two things:

Why are so many people not aware of the very synthetic nature of the Christmas story as it is popularly portrayed .. syntheses which they have come to believe are historical truths?

Why is there the need by many to embellish, romanticize and ‘make pretty’ the story of Jesus’ birth?

I have opinions (of course), but I think both of those are questions which serve best as jumping off places for your thoughts. Really, whenever we ponder questions, we are led closer to the Truth. So, ponder! And, as I’ve said before, you’ll know when you’re getting near Truth, when you start seeing more questions. It’s a never-ending cycle- a conundrum some might call it. Maybe we’ll run into some of those wise men along the way..

* Apologies to those who may love Thomas Kinkade, may he rest in peace. But I just can’t stand anything about his “art”- his style, his marketing, his assembly line production of new products, nor the purchased adoration of fans. He was, once upon a time early in his career, a pretty decent painter. But…$. The rest of the story of his art manufacturing company is not one you’ll want to read if you are dedicated to really loving Kinkade’s  art.