Once upon a time, during those almost 300 years between Jesus and Constantine, Christianity, aka “The Way”, was a movement. After Constantine marched his army through the river in the year 312 and declared them defenders of the now HOLY Roman Empire, Christianity began its long slow, sometimes horrifying move into institutionalism.

The journey from movement to institution meant Christianity was done evolving- the spiritual revolution was over, and rules and buildings would begin to define it. What had been a threat to the State, now became, and would continue becoming, a guardian of the State, a Defender of the King and of the status quo. The stories of hell and fear and eternal punishment took on new urgency- they kept those unhappy peasants in line!

Of course all of that sounds familiar because we are so intimately familiar with the post-Constantinian Christian institution. We are not so familiar with the Jesus movement, and not even with Jesus himself. I say that, because few of us follow Jesus all the way into the sacrificial depths of his central statement- the Sermon on the Mount. But we try, and sometimes – oftentimes?- that trying produces stunningly wonderful results.

It’s when we get near the wounded, sick, demon-crazed, poor, lonely, homeless Jesus and accept his two-fold invitation to both help him and follow him, that we become great. We become great because the Kingdom of God in us is made evident. We forget ourselves for awhile and are possessed by the Other- the Other in need, the Other who needs the love and grace of Jesus that Jesus entrusted to us to spread around. Where we end and Jesus begins, and where the person in need begins and Jesus ends- all of that gets muddled and confusing- as it should! We realize there is no difference between us; the kingdom of God inside us is the same Kingdom of God inside the addict, the whore, the prisoner, and Jesus himself.

I once was blind but now I see- it’s a song we have to sing because we cannot keep quiet anymore, with our voices, hearts, or minds!

But the institution of Christianity cannot let any of the above paragraph’s realities happen. When the Jesus Movement comes round, rules and dogma and bank statements become of no importance. The building begins to be in need of repair and people start seeing the Bible not as a chain, but as a chain cutter. And that’s dangerous- to the Church itself, but also to the status quo, to governments, to the financially privileged.

Thus, the Church has had to be turned into something not found in the Bible, and certainly not in the gospels. It’s why the Bible is hard to read and confusing for many- it doesn’t seem to line up with the presidents who shout “Bomb them!” or the preachers who say “Damn them!” People need teachers and preachers to tell them what the Bible says- to lead them through the thick forest of difficult-to-understand histories and strange orthodoxies. Where do you find Weapons of Mass Destruction or slavery or border patrols in the gospels? It doesn’t make sense, so there are the TV guys and local self-ordained preachers to lead the unwashed through the darkness and into the holy light of FOX News.

Christianism is synonymous with the status quo, the need for continuous growth in the gross national product, and unchecked capitalism, in such a system. And it is entirely correct to ask in a time such as this, “Where the hell is Jesus?” It is correct to ask that question because the answers can only lead us to the edges of hell which is exactly where Jesus said we would find him: in need of clothes, food, water, medicine, and a friend.

Which is why churches with food courts, and gospel gatherings on the Mall, or anywhere that is entertaining rather than heart-provoking or heart-breaking, are such inviting, pleasant places to be. (“I hear they’ve got a new gift shop in Fellowship hall!”) They are not places where your hands will get dirty, where your nose will get bloodied, or where your wallet will be emptied.

And it’s why the remnant will always be going the other way in church. It is the remnant which has kept Jesus alive through the Crusades and the Inquisition and the crazy American “Spiritual Awakenings.” It is the remnant like Paul, Francis, Clare, Catherine of Siena, the Desert Mothers and Fathers, Galileo, Therese of Liveaux, John of the Cross, and so many others who dropped out and dropped away from the Institution and found again the movement and the heart of Jesus.

Christ is not Jesus’ last name. It is our identity. Jesus the Christ is the one we follow. The message is universal, it is not separating, it is about love. It is about the children, the women, the little men, the cripples, the former jerks, and the Jews, Gentiles, slaves, and freemen. It is about soldiers- even the ones with the hammers and nails. It is about the donkeys, the lilies of the field, and the birds of the air. It is about the rocks, for God’s sake, which are crying out when we do not.

It’s not about rules, or institutional bullshit. At all.

In groups of two, three, four
they skim the wet surfaces of Earth,
seeing past the white, churned murkiness
into the silver flashing of
mealtime without end..
…Amen.

The sun is not yellow,
nor is the grass green~
and the sky is blue, yes,
but much more.

..The real colors of the sun
and of grass
are found on the backs of seabirds,
and shining through the wings
of dragonflies
The other colors of the sky are
seen
when you close your eyes while eating
rhubarb pie (Mom’s recipe)
And when you feel the dog’s nose
against your bare leg. 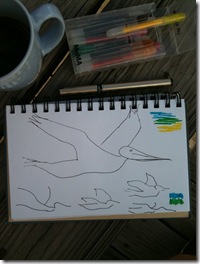