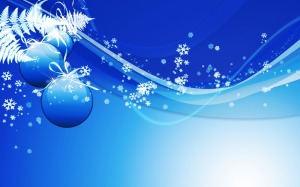 There are two things I would lose myself in when I was a child. One was a particular blue wall. The other was the blue lights (always blue) of the Christmas tree (always set up in the bay window of the living room.)

I would stare at those blues- the wall a robin’s egg blue, and the lights a glassine electric blue, in which could be seen the hot tungsten, burning, afire. I understand a bit more now (but only a bit more) about ADD than I did then, and much more about the proclivity of some persons to be ‘dreamy’ (the word then) or that some are prone to a transcendent view of everything which can be, until one has the words for it, or a handle on it however loose that handle may be, the kind of state of being which causes an adult just as likely as another child to ask “what are you looking at?” or (the more ominous) “what’s wrong?”

In the blue of the wall I would wonder..about why? (am I me) and how? (did I get to be here) and what? (is this all about). I was pretty young- 6,7,8- and these were questions born, I know, of cognitive connections winding their way into normal childhood growth; nonetheless, I remember them explicitly today, a whole bunch of years later, as happening yesterday. I know that makes little sense and it didn’t then either- “what’s wrong with you?” However, the best verbal response I’ve put together over the years has been that the wall took me out of myself. And outside of myself, then and now, there is no time. Yesterday, today, then, now..they are a cloud, rather than the straight line into eternity that they masquerade as away from the blue wall.

Or the blue lights. I know in later years there were other blue Christmas lights- opaque, cool, UL appoved and safe. But the lights which caught my eye- and which I gave my consciousness over  to a few minutes at a time- were like fine glass dipped in blue ink- transparent, but still blue. The whole inside of the bulb could be seen- the little coil of tungsten cooking inside the argon filled glass oven was bright,and white hot.

No, you didn’t want one of these hot bulbs laying up against a deeply dry evergreen/wasgreen branch! Christmas disaster! (and I think there was such a disaster in every town every year in those days when the Underwriter’s Laboratories seemed to be cutting a lot of light bulb slack!)

The blue light, held carefully though, was like a candle pulling me toward that same general blue wall space. Maybe it was a petit mall seizure, and I have wondered about that-really. The fire, the blue, the coil, the glass- even now, they are present- right now. Are they tens of feet deep in the makeshift landfill behind our home, covered by the next 40 years of my parents living there? Are they smashed now so small they have been scattered by rain, worms, roots, and wind into invisibility?

Or are they here now- because I do see them, I do? And I’m seeing them outside of memory, outside of nostalgic Christmas memories. I’m seeing them in the room they were in, the one with a bay window and blue walls. And the bulb is hot and the walls texture is wallpaper over hundred year old plaster on latticed, hand-shaped lathes. painted robin’s-egg blue, like a sky inside the house, and the stars are hot in the night’s dark blueness.

And the space between that last sentence and this one was long enough that, if it was later in the day, not early morning, someone would have asked, “What are you looking at?” or “What’s wrong?” And my answer now, the one I knew way-back-then but didn’t have the words for, would be

One thought on “Blue”