where there are no words to hide behind,

he is aware of all.

He moves in stealth and grace,

with unintended injury to nothing,

and in calculated swiftness.

lying low in the grass,

then leaping over it,

now crouching within it.

while caressing all that is seen

in the deep and widening

sweep of his view.

Read other chapters of reaction to the Tao: taochow.wikispaces.com

I sat in a lovely garden on a white metal bench

(per a copper marker attached to a nearby Live Oak)

(there once was a last name there, too, but it was not readable-

hit perhaps by a passing mower,

or more likely because of all-too-common shoddy workmanship)

I watched the gardeners (illegals? Maybe, but very polite)

and a deep, very pleasant chartreuse,

growing in dark musty mulch and

being pruned now in measured

An attendant brought glasses of wine-

chosen by a host

a lovely red with a dense concentration to the nose

At that moment the

crisp white linen of my existence

and the name by which I had come to be known,

and by which I knew myself,

ceased to mean anything.

It meant nothing at all,

and I was not unhappy:

And in celebration I looked directly into the sun

and did not go blind.

In fact, looking away I realized I could

for the very first time

I could see the serrated edges of rose leaves,

and the sensuous bulge of rose hips

both against the rich loam of earth’s bursting forth

toward the sky which had no name

and the chattering of earthmen with hoes and trowels

became the music of the spheres

and their dark cocoa eyes were my windows now

on this world without end

this world without beginning.

When I was young enough that

my hand, my mouth-

I knew what the cormorants

at the lake know now as they sit

on the bare limbs of submerged trees

and wait for, dive for,

they are not a part of anything;

they are the tree, the water, the fish,

the sitting, the waiting,

the diving, and the swallowing.

The baby (me) understood that so well

that no words were needed,

but then I grew up and built walls

with words as I was forgetting

If I could ask the cormorants, or the fish,

or the tree for more information-

if I could make myself known to them

not as they are known to me now

but as the baby (me) would have known them

(if that were possible)

then, then I could

(Read other chapters of reaction to the Tao: taochow.wikispaces.com) 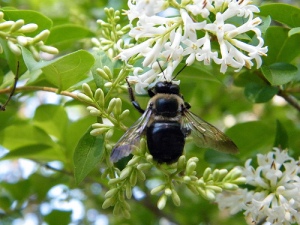 The desire of the bee for the honeysuckle

is no greater than

the desire of the honeysuckle for the bee.

That perfect equilibrium of

is the very essence of

the precise story of the Universe.

Some would even say

all schools of musical theory.

Read other chapters of reaction to the Tao: taochow.wikispaces.com/Chapter+12

I lift my hands into the air

(a kind of prayer)

but because my hands are already full

so full that I must give what I have

so that I will be able again to feel the wind.

My hands fill easily with what I want.

But they must be empty to receive

to read other chapters of reaction to the t1ao: http://taochow.wikispaces.com/Chapter+11 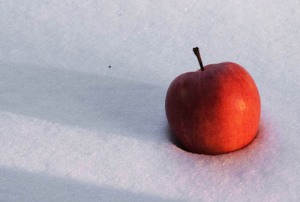 I can see this nighttime snowfall

in its prismatic whiteness,

layers of light on light

I taste this apple

for the nations beginning with

my tongue, then yours,

hussshhh in the silence and

because there is more

there is always more

to read other chapters of reaction to the tao: http://taochow.wikispaces.com/Chapter+10

Is it possible to imagine an obese Jesus?

Or one who demands a corner office?

Did he “consider the lilies”

then put them in a nice vase, to die?

I wonder if he considered the cut of his robe,

the company he kept,

or the bouquet of his wine?

Did he turn the temple tables

in a fit of feng shui, or fuss at Peter

about the amount of filth on his feet?

Did he ever once, ever, even under his breath,

bitch about the food he was given?

Or say he was just too damn tired to go?

Here’s a tougher one:

Other chapters and responses here; feel to discuss, or add your own: http://taochow.wikispaces.com/Chapter+09

I discovered this evening that entire magazines are part of Google’s massive digital library and I began looking for a particular issue of LIFE magazine. I wasn’t sure of the specific issue, only that it was from the summer of 1969 or 1970 and I knew that only because I knew that I had first looked at the magazine- in a crummy motel somewhere in western Pennsylvania or upper New York state where I had been involved in installing golf course irrigation systems during my sophomore and junior summers while in college.

So I found the magazine I wanted to find/was afraid I would find. It’s the June 27, 1969 issue of LIFE and in it were pictures of all the Americans killed in Vietnam during the week of May 28- June 3. The article was called “The Faces of the American Dead in Vietnam- One Week’s Toll.”

The article had made the news previous to its publication. Some government officials at the time had asked that it not be published, but there was an overwhelming response from the families of the dead soldiers that it should be published. In the history of the Vietnam War, the LIFE article is one of the factors credited with redirecting much of the remaining popular support of the war.

I carried it with me all day, having bought the magazine at a grocery store near the restaurant we ate lunch in each day. Washington, Pennsylvania: once I ‘found’ the magazine again today, I remembered exactly where I was at the time. On a $10 per diem, I was able to stay at a motel and eat out two meals a day. There were other workers at the motel, too, but I- fortunately, that day- was in a room by myself. We finished work at about 6 p.m., stopped for the obligatory (at the time) six pack of Rolling Rock (sweet green-glassed golden brew of the Susquahanna Valley), cleaned up and- usually- went somewhere together to eat. I opted this day to stay, drink beer, and look at the LIFE.

The article consists mainly of pictures of mostly very young men- 242 of them (two hundred and forty-two.) There is a name, a branch of service and rank, and the age and hometown of each man listed. One week’s toll: 11 pages, 20 names per page. I looked at the first row of pictures today and had exactly the same reaction I had almost 42 years ago and that I am having right now as I write and look at the pictures once more.

Here, by the way, is the link: http://books.google.com/books?id=pE8EAAAAMBAJ&printsec=frontcover&rview=1&source=gbs_atb#v=onepage&q&f=false

I know now why I used to drink too much: I see and feel everything (EVERYTHING) through an exaggerated sense of recognition and understanding. Beauty or ugliness- doesn’t matter: my empathy is permanently switched on high and I will see every brush stroke of a beautiful painting and feel every tear of someone else’s hurt. Alcohol makes beauty and/or pain bearable. Odd? Yes, but there are plenty of others who know those feelings exactly. Hopefully, they’ve gotten some help. If not, call me. Really.

The beer, that evening, didn’t help very much. Row after row, page after page. As I looked at them today for the first time in so many years, I realized I could still remember well some of those faces. They had etched themselves in my deepest mind. They were synaptically sealed in my 19 year old brain.

Johnny Cash’s ‘Folsom Prison Blues’ was playing on the radio as I looked at the pages of pictures. It would become the commemorative soundtrack to the event of my mind exploding. Because that is what was happening. For whatever cognitive reasonings were coming together in my young mind, I’ve recognized that evening many times since as one of the pivotal ones of my life. That was the night I stopped (forever) believing my government knew best, was best, or acted best about anything they purported to know, be, or act upon. It was the first time I asked myself the question I had heard posed many times by others but had never fully asked on my own: “What the hell did these guys die for?” And I still don’t have an answer.

Later that Summer, there would be Woodstock. A month before Woodstock, Neil Armstrong stepped out onto the moon. Two days before that, Larry- a guy I’d grown up with at school, in Sunday School, and on various football teams, himself became a picture of a dead soldier: Larry Esterly, 20, Marines, Lisbon, Ohio.

Years later, I learned in counseling how to stop looking quite so deeply at everything, so that beauty, ugliness, or any of a hundred various sensory stimuli, would be unable to tattoo themselves quite so painfully on my emotions. I stopped drinking alcohol, too, 17 years ago. But those positive efforts were too late for the trauma that the images of those 224 sons, brothers, friends, boyfriends, uncles, cousins even young fathers had battered on my mind, and my soul.

I didn’t expect to ever see those pictures again, because years ago I had decided never to look too hard for them. But it was easy today, and I am glad to have seen them all again. I told Patrick, Albert, James, Peter, Robert, and..Larry, in conscious thought that transcends time and the universe, that each of them had helped, for awhile, to shape a nation into one that vehemently disagreed with its very wrong leaders.  I thanked them for their idealism, their enthusiasm, and their courage- a courage in which I had never been called upon to breathe, or live, or act. I apologized to them for minutes, days, even years that I’d wasted on the mundane, selfish, or idiotic- time that none of them had ever had a chance to experience.

And I thanked them for allowing me to remember them today, and maybe even honor them this way in a small way.

I hope others might take a look, too. And talk to them.

God lies in the humus,

as tap roots reach for his touch

and as nematodes circle

nobody on top knows he is there

while those dwellers in the deep,

in celebration of God’s nearness:

his life among them,

giving rise to them,

He fills the berries, the nuts, the fruits,

the wild grasses, the grains,

with blood to be

Other chapters and responses here; feel to discuss, or add your own: http://taochow.wikispaces.com/Chapter+08

The great fir- so tall that its canopy

is indistinguishable from sunlight,

the soil under my left foot

to the edges of my dreams

began somewhere in eternity and

will end only after

and then again to the galaxies

Other chapters and responses here; feel to discuss, or add your own: http://taochow.wikispaces.com/Chapter+07